The [Somewhat] Secret History of the Clinical Trial: A toast to the Salisbury and the Diffusion of Innovation

Clinical Trials Day is as good an arbitrary day of recognition as there is. As someone whose full-time focus is on the patient experience in clinical research, I know I bring biases to that assessment. Still, the celebration of the clinical trial is really an ode to the endless human drive to understand, to discover, and to try to change our destiny through careful thought and reasoned action. Over the last ten years, the origin story of the first clinical trial has achieved an archival clarity, but as with all legends there are a few surprises to be found in digging deeper – and some lessons for our current age of innovation.

The story of the first clinical trial - from the creation of new knowledge to transmission and then preservation - has clear parallels in our modern clinical research industry, as we work to explore new therapies, building on older insights and observations, communicate the power and value of new breakthroughs, and wrestle existing biases and intransigence to broadcast new innovations across the healthcare delivery spectrum.

Clinical research starts by posing a very basic question: How can we determine a given therapy actually works? Without relying on argument of authority or tradition? How can we really know? Figuring out how to answer this question was the key to igniting the era of Medicine as a Science. The solution involved bringing together observations of the world as we experience it, the testing of the best folk-medicine insights and happy accidents we were afforded, and then recording and transmitting this information for others to consider and develop further. While that sounds simple in description, it has been a process laden with suffering, inertia, and setbacks. 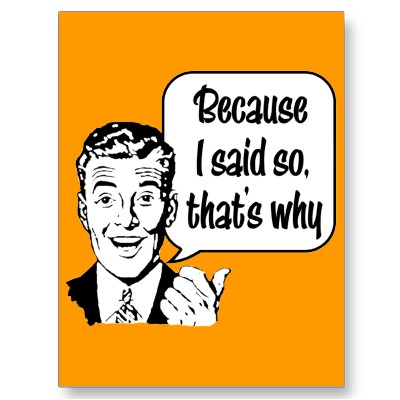 What every argument from authority eventually boils down to…

We teach the Scientific Method in classrooms every day, but we have mostly erased the story of the difficult battles fought to beat back our ignorance. The romance and heroism of discovery is easy to see when studying the Age of Exploration in the 17th and 18th centuries as cartographers and captains made their names on voyages across the globe. We look at those exploits with a clearer lens these days, capturing a more complete picture of the impact and effects of those voyages, but the audacity of those exploits still rings through the years. Similarly, while we might explore the limitations of the effort, it remains right and valuable to celebrate the successes of what is widely considered the first clinical trial – Dr. James Lind’s work on scurvy.

The origin story of the clinical trial fits nicely inside the era of Captain James Cook, preceding his travels by a few decades. Before Cook set sail to circumnavigate the globe, we had first the soft-spoken but equally heroic Dr. James Lind taking on the deadly scourge that was scurvy – a disease characterized by lethargy, blistering, bleeding and death – a problem ubiquitous on long sea voyages. Scurvy was a killer – the rolls from that time have estimated death rates as high as 25%. Right from the very beginning, the work of clinical trials has been aimed at high impact diseases with enormous potential for alleviating human suffering. 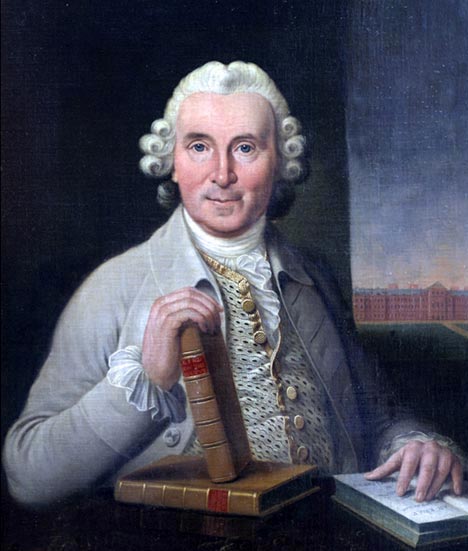 Dr. James Lind – just as brave but in need of a better portrait

On May 20, 1747 as a surgeon on the HMS Salisbury, a ship of the Channel Fleet, Lind decided to test a series of treatments for scurvy ranging from “elixir of vitriol” to “sea water” and, for two extremely fortunate men, 2 lemons and a orange. In our standard history, Lind establishes that citrus fruits improve and prevent scurvy, and a deadly disease vanishes from the scene – with just 2 cases reported by 1806-1910. In focusing on citrus he was rediscovering what had been observationally found and lost repeatedly since the transatlantic voyages to the New World, starting with Vasco da Gama in the 1450s. But importantly, and very much as a product of the 17th century, Lind formalized the discovery through a clear methodology, written observations and open – if half-hearted - dissemination of the findings.

While the basic facts are known and well preserved by the brilliant James Lind Library’s website – including images of the pages of Lind’s handwritten account of his experiment - the broader picture of where the experiment came from and the journey from observation, testing, proof and onto the adoption of Vitamin C as a cure for scurvy, are a little less well known. Missing also from the record is the fate of the 2 men fed sea water. As the English Channel is salt-water and given the 12 men were picked for similarity of disease severity, the silence here may be a sign of the broad acceptance of death from scurvy, but also speaks to how far we’ve come in focusing on reporting all outcomes data. With a similarly disastrous incompleteness, though Lind did publish his findings, he didn’t see the promotion of the results as his responsibility. As a result of this reticence – and the competing interests of other theorists - the path to formal adoption of citrus on ships by the Royal Navy took another 52 years, with a significant and unnecessary loss of life at sea. 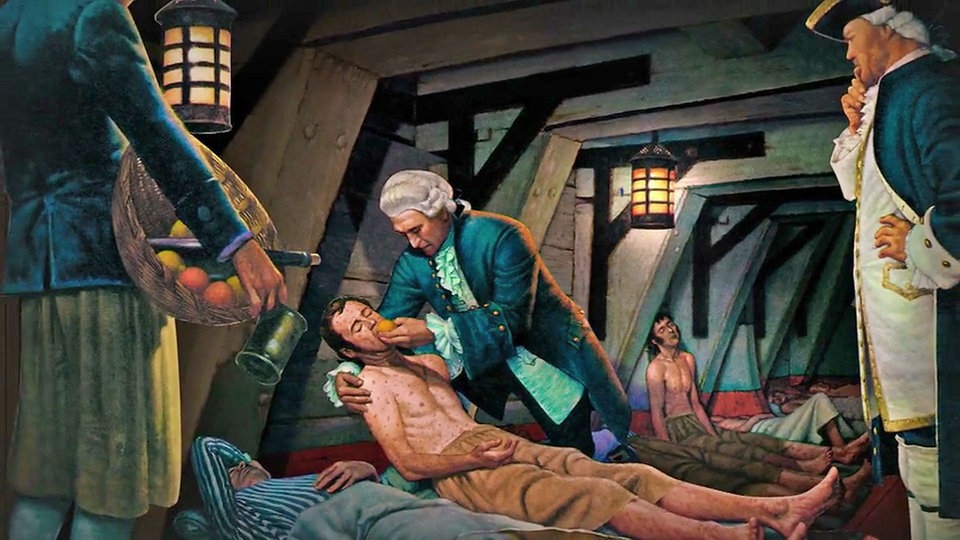 Is the participant the foreground the one who got “sea water” as therapy?

Most concerning of all, after all the work done from Lind’s first clinical trial to the adoption of citrus in 1799 – we ended up forgetting this lesson altogether in just over 100 years.

The loss of this knowledge had wide reaching consequences – including playing a role in the deaths of Robert Scott’s doomed expedition to the South Pole in 1912. The story of the subsequent loss of the knowledge of the experimentally-proven value of citrus therapy just a scant 100 years later is a tale that is rarely shared when celebrating the Salisbury thought it should be, because it highlights both how precious and how fragile discovery truly is.

The story is summarized in the brilliant essay "Scott and Scurvy" by Maciej Ceglowski. In sharing the doomed mission to beat Amundsen to the South Pole, Ceglowski asks how it was that Scott was caught by surprise by scurvy, when his own Royal Navy had solved the problem a century earlier. The answer comes as the cutting insight that the problem of this knowledge loss was not just the difficulty in diffusing new knowledge – a theme well-covered by Gladwell and many others – but also paradoxically of how scientific progress itself can play a role in erasing hard-won knowledge.

Ceglowski lucidly explains how the invention of steam power led to shorter sea voyages (a good thing) and this in turn meant less familiarity with scurvy (also a good thing), but that this very improvement created a vulnerability. When pricing pushed the Royal Navy to switch to Vitamin C-poor West Indies limes, it took a great deal of time for the problem to manifest itself. By the time the Navy had discovered that both the source of its Vitamin C and how the nutrient source was processed were faulty, there was enough confusion in place to allow a competing theory of scurvy’s cause to take root in the minds of influential scientists, policy makers, and physicians - disastrously including Scott’s own expedition physician. 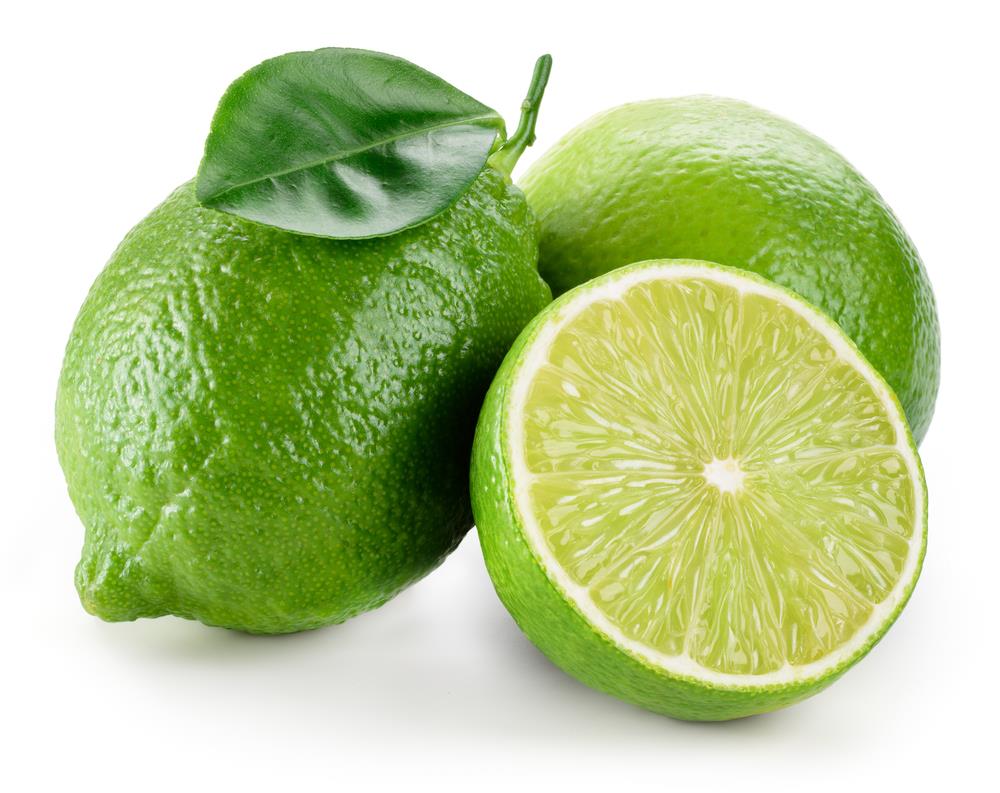 These are not the limes we are looking for…

To recover the knowledge lost, it took the serendipitous development of an animal model of scurvy, an epidemic in well-off infants, and the development of a testable theory of the disease [vitamin deficiency]. And so, by the 1930s and the isolation of Vitamin C, the new foundation for citrus as a prevention and treatment of scurvy was established – bringing us back again to the same footing we found aboard the HMS Salisbury on March 20, 1747.

So where does all of this leave us? Today, as we raise a glass [Spanish lime juice, no doubt] to James Lind and the Salisbury, we should raise one to Robert Scott as well. Taken together they are a lasting reminder of how difficult the journey to discovery and through to adoption truly is. They are also a reminder of how worthwhile the centuries of effort, of loss and of rediscovery are when placed beside the lives saved through the careful application of the scientific method to the practice of clinical research in the quest for new medicines.

Dr. Irfan Khan is a cardiologist and the CEO of Circuit Clinical, the maker of TrialScout, the first ratings and reviews platform for people seeking clinical trial options. An evangelist for the power of the patient experience to transform the discovery of new medicines, Irfan speaks frequently on the intersection between technology, healthcare, and clinical research.

Copyright © 2020 Circuit Clinical. All Rights Reserved. Third party materials included herein protected under copyright law. Use of this website and any information contained herein is governed by the Circuit Clinical Privacy Policy.